This month the MADONNAS OF MEXICO website features a preview of
Pope Benedict’s historic trip to Mexico.

Pope Benedict’s March trip, his first to Mexico, will include a stop at El Cubilete. To those outside Mexico, it seems like an obscure choice. Mexicans, however, are not surprised at all: El Cubilete is considered the second most important religious site in the country. 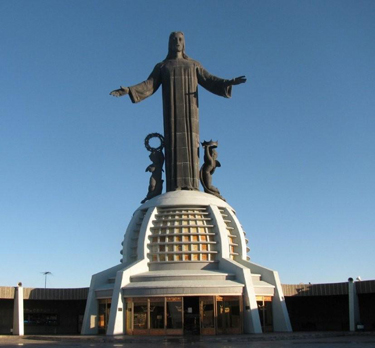 Pope Benedict will celebrate Mass at the foot of El Cubilete Hill, the site of the colossal statue of Cristo Rey (Christ the King). With its height of 9,000 feet, El Cubilete looks much more like an imposing mountain than a hill. The statue was declared a national monument in 1928.Cristo Rey can be compared to Poland’s ark church of Nowa Huta, the major symbol of Catholic Poland’s resistance to the anti-religious Communist regime of the Cold War years. Blessed Pope John Paull ll (then Cardinal Karol Wojtyla) laid the first cornerstone for the church in 1969.

Referring to El Cubilete, former Mexican President Vincente Fox said that Cristo Rey serves as a “rebuke to the repressors of religious freedom.” The dramatic history of the statue parallels that of Mexican Catholics in the brutal religious persecution of the 1920’s and 30’s, a time when government forces executed thousands of Catholics and scores of Catholic priests.

The 75-foot, 200-ton statue of Cristo Rey stands majestically atop the hill, his arms extending in a panoramic blessing on the valley below. Known as the “Christ of the Perpetual open Arms,” it rests on a concrete hemisphere that represents the universe. Two angels kneeling in adoration present crowns—one of thorns, one of majesty—to their King. The location is powerfully symbolic, too: According to the National Geographic Commission of Mexico, El Cubilete is the geographical midpoint of the country—Christ reigns, therefore, from the very heart of the Mexican nation.

The first of the Cristo Rey statues (there have been five) was built in 1920; 20,000 people attended the opening ceremony, and 80,000 (in defiance of the government) attended the ceremony for the blessing of the first stone of the second monument in 1923. This one was never constructed, however; it was declared “unconstitutional” and was forbidden by the state. In 1928, government forces dynamited the original statue, reducing it to a pile of rubble. Inexplicably, the heart and head of Jesus survived the disaster, undamaged and intact. Undeterred, the Mexican people built a third statue in 1937, this time hidden from the authorities. It is known as “The White Christ” (considerably smaller than the first one). Today it reposes in the Cathedral of Leon, where Pope Benedict will celebrate vespers on March 25. The last statue was built in 1944.

The Cathedral of Leon (the fifth largest city in Mexico) is also the home of the miraculous painting of Our Most Holy mother of the Light, the patrona (patroness) of the city and the diocese. The great cathedral was built by the Jesuits in 1746. The small image, which originated from Italy, hangs above the main altar. It is one of the most recognized patronages of Our Lady in Mexico; pictures of her can be found in churches throughout the country. They depict Our Lady, enveloped by light, saving sinners from hell. The Infant Jesus, cradled in her arms, blesses hearts. (Please note: this cathedral is described in the September 2011 Shrine archives of the MADONNAS OF MEXICO website.) 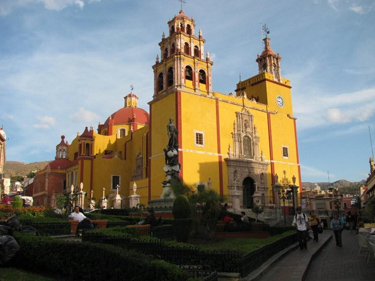 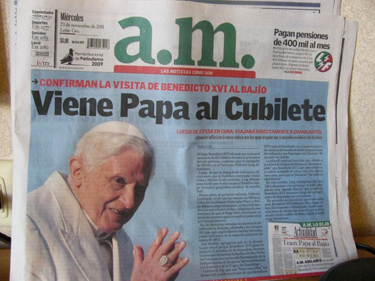 My personal favorite on Pope Benedict’s itinerary is the city of Guanajuato. On March 24, the Holy Father will bless the faithful at La Paz Square in the beautiful mountain city, a “colonial gem” lauded by travel writers. Declared a UNESCO World Heritage Site in 1988, the college town—the University of Guanajuato has 40,000 students—exudes a cheery vitality. It is a city of steep inclines, cobblestone streets, narrow alleyways, crayon-bright colonial buildings and flower bedecked outdoor cafes. Directly in front of the square is the 17 th -century Basilica of Our Lady of Guanajuato, an elegant, neo-classical church. It is a fitting home for the much-venerated statue of Our Lady of Guanajuato, the patrona of the city. The statue is reputed to date from the seventh century. It is believed to be one of the oldest Christian images in the Americas; the statue was a gift from the Spanish King Charles V in 1577 to the Mexican people in thanks for the treasures that poured into Spain’s coffers from the Guanajuato silver mines. It had been hidden in Spain for centuries during the occupation of the Moors and was rediscovered in the city of Granada in 1492.

The basilica is my hands-down favorite in the city. You open its doors and step into a sanctuary of utter serenity: A froth of pastel tones—lemon yellow, powder blue, rosy peach—permeates the striking interior. Lights shimmer from dozens of Venetian crystal chandeliers overhead. A bevy of statues and paintings grace the airy, light-filled space.

Pilgrims to these destinations will see what the Pope will—the beauty and history of Mexico’s Catholicism.

This article is reprinted with permission from the NATIONAL CATHOLIC REGISTER