OUR LADY OF IZAMAL Izamal, Yucatan

The Yucatan. To sun-starved northerners the very name conjures up images of Caribbean beaches, a turquoise sea and ancient Mayan ruins. Lots of them. The Yucatan Peninsula is reputed to have one of the richest stores of archeological treasures in the world. It is populated by the Maya, the most populous indigenous group in North America. Multitudes of Canadians and Americans visit every year.

If one can tear oneself away from the beaches, a prime location for the exploration of such ruins is the scenic town of Izamal. It is situated in the heart of the Yucatan Peninsula, 270 km. west of Cancun and a 40-minute drive from the state’s capital, Merida. Considered the oldest and most beautiful town in the Peninsula, Izamal was one of the major Mayan worship sites of pre-Hispanic times.

As interesting as the ruins are, the “top attraction” in Izamal (according to travel guidebooks) is the “magnificent” Franciscan convent of St. Anthony of Padua. Its origins go back to 1533. It was one of the first monasteries in the western hemisphere and became a centre of evangelization for the whole peninsula.

The enormous complex (church, atrium and convent) is one of the largest of its kind in America and was built upon the platform of the immense temple, Pap-Hol-Chac, a ceremonial centre dedicated to the Mayan god of rain. 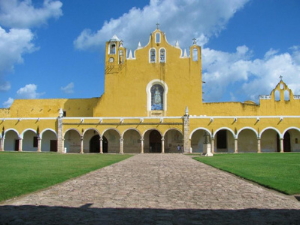 The Franciscans realized the religious significance of the location: Izamal had been the headquarters not only for the Mayan priesthood, but for the worship of the supreme Mayan god, Kinich-Kakmo. Under the direction of Franciscan founder, Fray Diego de Landa, most of the Pap-Hol-Chac pyramid was demolished and its stones were used for the building of the new monastery, thus “sanctifying a place that had been one of abomination” (human sacrifice had been practiced there). Another massive pyramid in the town, Kinich-Kakmo, the second largest in the state, was built between 400-600. Partially restored, it is a five-minute walk from the monastery.

The late Blessed Pope John Paul ll visited the convent in 1993. He chose it as the meeting place for his encounter with the indigenous peoples of Latin America. A statue of him in the courtyard (as well as a small museum in the convent) commemorates the event. 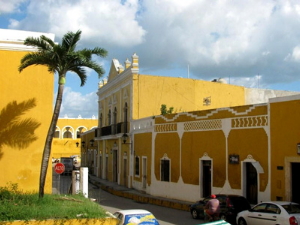 The atrium of the world-famous convent is reputed to be the second largest in the world, after St. Peter’s in Rome. The grass-covered courtyard is surrounded by 75 distinctive arches. The structure is painted a vibrant yellow; in fact, the entire town is painted this colour. It is known in travel brochures as “The Yellow City.” 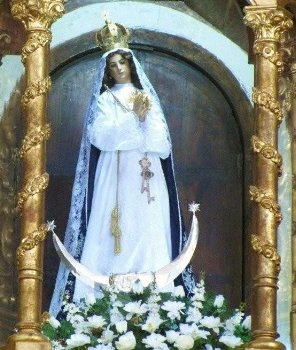 The monastery’s principal church is the Sanctuary of the Virgin of Izamal, dedicated to the Immaculate Conception. It is the most important Marian shrine in the Yucatan Peninsula (which encompasses three states: Quintana Roo to the east with its 200 km of Caribbean coastline, Campeche to the west and Yucatan state to the north).

The famed statue of Our Lady of Izamal, named Queen and Patron of the Yucatan, was commissioned by Fray de Landa in Guatemala (the centre for religious art in the New World) in 1558 and is enshrined in the church. The lavishly painted camarin(dressing-room of the Virgin, a feature of Marian shrines in Mexico) is said to be the oldest in the country. It is in sharp contrast to the nave of the church which is in an austere, typically 16 th century Franciscan style. 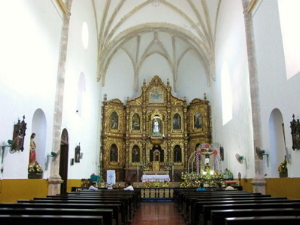 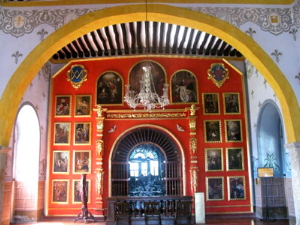 Read almost any description of Izamal and its convento and you are sure to notice one thing: superlatives abound. Sometimes such guides are known to exaggerate. In this case they do not.

This article is reprinted with permission from the CATHOLIC REGISTER