OUR LADY OF ARANZAZU – Guadalajara, Jalisco

It’s easy to overlook the chapel of Our Lady of Aranzazu. You could walk right by it and not even give it a second glance. The facade is austere, stark, and utterly unassuming. But step inside and you enter a different world: a masterpiece of golden Churrigueresque architecture with an “astonishingly ornate” interior. “Divine” say some. “Stunning,” say others. 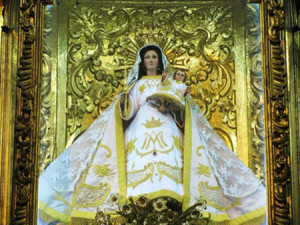 The word Churriguersque comes from a family of Spanish architects and artists, the Churriguera family. They developed an ultra-baroque, highly decorative architectural style—unique to Spain and Latin America, particularly Mexico—which was popular in the early 18 th century. 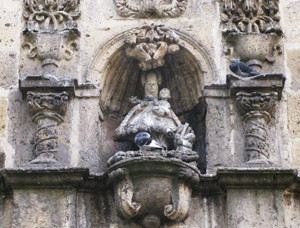 tes from the Basque region of Northern Spain. A stone statue of her can be found in its own niche on the facade above the main entrance. And this is how she got her name: Centuries ago a young shepherd was tending his flock in the remote Basque mountainside. He suddenly “stumbled upon” a most unusual sight: an image of Our Lady and Child trapped in a thicket of thorns. “ Aranzazu!” “You are in the thorns!” shouted the startled shepherd. Word spread about the discovery and the Basque people soon adopted Our Lady of Aranzazu as their official Patroness. In time the devotion was brought to New Spain (Mexico) and a Franciscan church was built in her honour by Franciscan Padre F. Inigo Vallejo with the support of wealthy Basque settlers in Guadalajara. 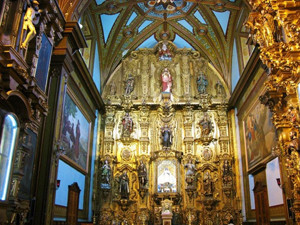 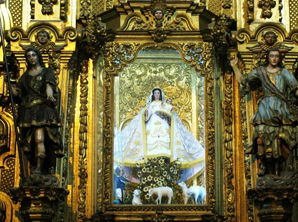 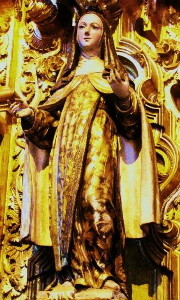 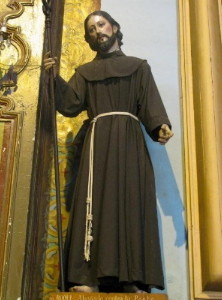 At one time the chapel was part of a vast Franciscan monastery which was several city-blocks in size. The complex consisted of the principal Franciscan church (across the road from the chapel), six chapels, a convent, a graveyard, an orchard and a huge atrium (courtyard). By 1750 the monastery’s vast motherhouse housed as many as 100 friars. It was the centre of Franciscan evangelization efforts in Western Mexico. Only two structures remain from this era, the church of San Francisco and the chapel of Our Lady of Aranzazu which was built between 1749 and 1752.

The chapel consists of one narrow nave (there used to be three) and three gilded Churriqueresque altarpieces, extravagantly adorned with wooden statues, carvings and over-sized canvas paintings.

The church was declared a national monument in 1932, a “patrimonial legacy” which had been preserved for centuries. During Mexico’s wars of Reform in the 1920’s, the church —which was used as military quarters—suffered extensive damage.

The chapel of Our Lady of Aranzazu has been described in travel books as a “splendid Baroque jewel.” An apt description. A short walk from the zocalo (the city centre), it is a must-see for any visitors to the city. 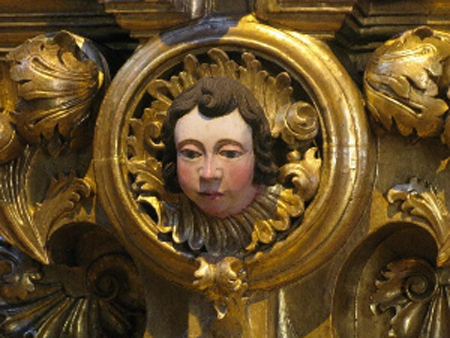