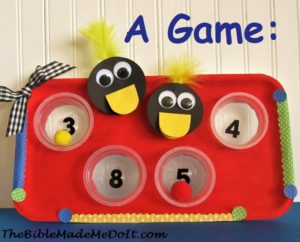 Make a stand-up figure of Moses as a shepherd! Copy the pattern below, colour and cut out. Note that the arm is cut out separately. Don’t forget to add a paper fastener so that his arm can move! Make your own shy sheep (or two!) peeking out from Moses’ robe. By making a cardboard stand you can make a 3-D figure of Moses. Add a woolly beard! 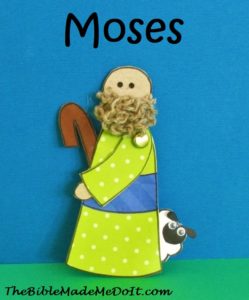 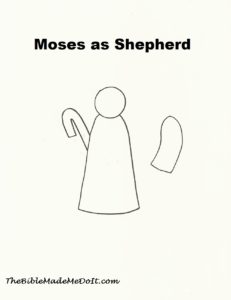 TO MAKE A TABLEAU (TO MAKE MOSES STAND UP) make a cardboard stand as shown in the photo below. Make it the proper size to fit the figure and tape it to the back.  Now Moses will be a 3-D figure that can stand on his own! It is very simple to make—it is just one piece of cardboard folded at one end. 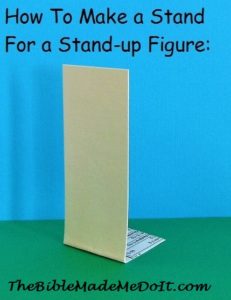 Make a Queen Esther puppet from a craft-stick and learn how to make a frilly bustle! 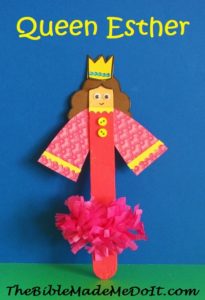 Copy the pattern to make the arms and glue to the back of the stick. To make the hair copy the pattern(below) for the hair and cut a slit at the forehead to insert the hair onto the head. Glue at the back. Note that this puppet has a wavy hairline at the top. You can make her hair straight across or wavy.

TO MAKE THE FRILLY BUSTLE: 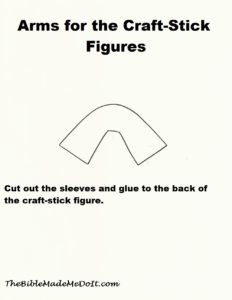 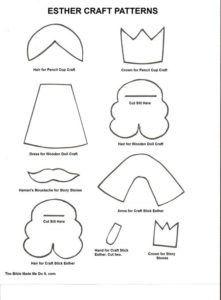 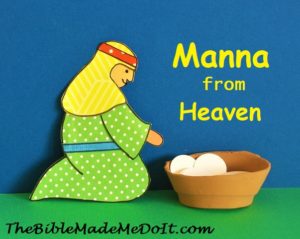 n gathering the manna from Heaven!

His basket is made from the bottom of a styrofoam cup! Did you know that the cup can be moulded into a basket shape? Just try it and see! Paint the basket brown.

For the figure, just copy out the pattern below, colour and cut it out. To make a tableau, you can add a stand to the back of the figure. 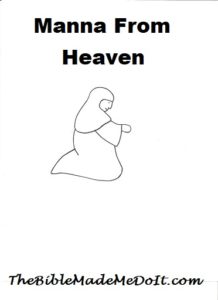 To make a tableau (to make the figures stand up) make a cardboard “stand” as shown in the photo below. Make the stand the proper size for your figure and tape it to the back of the figure. It will now be a 3-D figure that can stand on its own!

THE WEDDING AT CANA 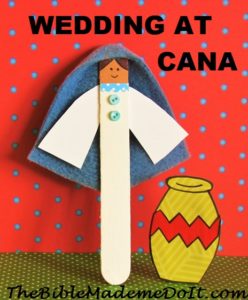 TO MAKE A TABLEAU:  (to make the jug stand up on its own) make a cardboard stand as shown in the photo below. Make the stand the proper size to fit the jug and tape it to the back. It will now be a 3-D figure that can stand on its own. 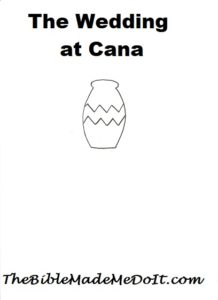 Make a crib for baby Moses! Make Moses’ head (a circle on a popsicle stick).  To enable the baby to move cut a slit in the crib so that Moses can be inserted through the slit. See the second photo for an idea of how to make baby Moses. Copy the crib pattern, colour and cut out to complete the craft. 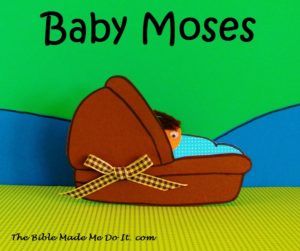 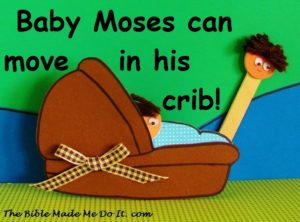 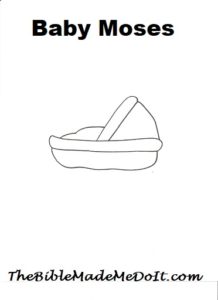 MOSES AND THE BURNING BUSH 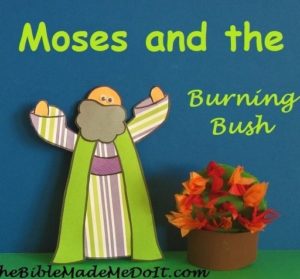 TO MAKE THIS CRAFT YOU WILL NEED:

HOW TO MAKE THE BUSH:

Cut out the pattern from below and colour it.

TO MAKE A TABLEAU: Make a cardboard stand as shown in the photo below. Make it tall enough to fit the figure of Moses yet wide enough that it will provide support. Tape it to the back of the figure. Moses will now be a 3-D figure who can stand on his own! 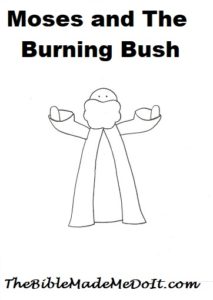 DEBORAH UNDER THE PALM TREE

Make Deborah sitting under a 3-D palm tree! Very easy and fun to make! The palm tree can stand on its own. Cut out the pattern for Deborah and colour it. Now you can make a tableau by sitting Deborah in front of her very own palm tree! If you don’t want to make a 3-D tree you can draw one instead. 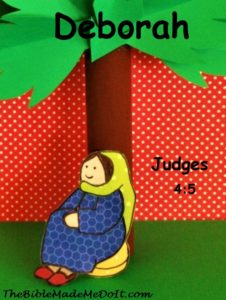 TO MAKE THE PALM TREE: 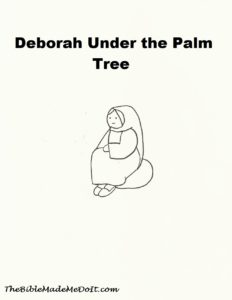 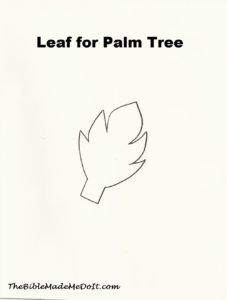 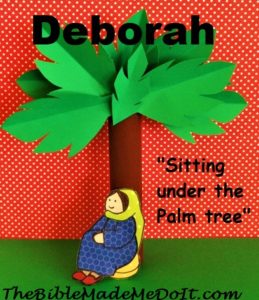 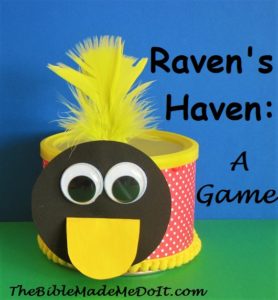 game for small groups to see who can put the most food into the raven’s haven! The haven is his nest where he stores all kinds of bread and meat to bring to Elijah.

TO MAKE THE GAME:

First decorate the can as shown in the photograph. The raven is made from a circle. Add googly eyes, a beak and a yellow feather!

ONE ONE SQUARE WRITE THE WORD Raven’s Haven. All the squares are then placed in the can.

HOW TO PLAY THE GAME:

Hannah sewed tiny coats for Samuel! She would bring them to him when visiting him in the temple. Design your own coat for Samuel! The puppet Hannah is made from a craft-stick. Her arms are glued to the the back of the stick. 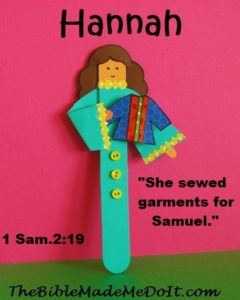 To make Hannah’s hair copy the pattern from below titled ESTHER CRAFT PATTERNS. You can see the pattern for the hair on this page. Note that the forehead area is designated by a slit across the head. The hair is inserted through this slit onto the head and is glued to the head at the back. NOTE: Hannah’s hair is not cut straight across the forehead—it is cut in a wavy pattern. You can design her hairstyle any way you like!

The tiny coat is glued on to the figure’s hands. 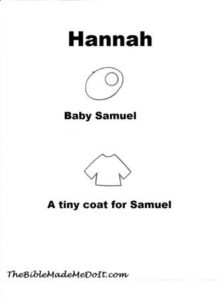